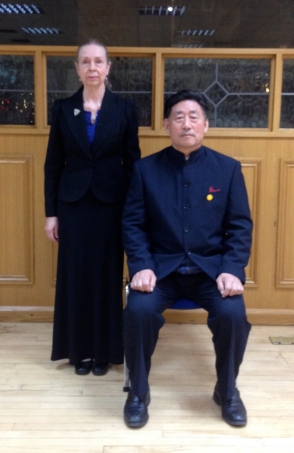 Living Tai Chi was founded in 2015 by Chris Jones. With a long background in traditional hatha yoga practice, she first began to learn traditional internal Chinese martial arts, Shaolin gong fu (kung fu) and qi gong (chi kung) in 1998, before she experienced the power, serenity and beauty of tai chi. Then began the serious study of Chen Taijiquan and qi gong with Liu Quanjun from 2002 to the present day, and his teaching has inspired and changed the subsequent direction of her life. Even after 15 years of training she continues to benefit and learn from his expertise and is immensely grateful for all she has learned from him, much of which is the basis of her own classes.

Chris was also fortunate to meet and train with Grandmaster Chen Xiaowang in 2003, and continued on his subsequent annual visits to the UK. Now as he no longer travels to the UK she travels to China to work with him. Chris holds a 4th Duan Wei certificate from the Wushu Association in China for Chen Taijiquan, has a 2nd level Coaching and a Judging certificates from the BCCMA. in 2013, she was very honoured to became a disciple of Grandmaster Chen Xiaowang on a training visit to Chenjiagou (Chen Village), China. In 2015 Chris completed an NHS recognised course ‘Tai Chi for Rehabilitation and Falls Prevention’ and set up Living Tai Chi to extend her work in developing tai ji practice concentrating on the health benefits. In 2016 she also completed a Practitioner Course in NLP, and received certification from The Society of Neuro-Linguistic Programming.

In 2004 she founded and continues to manage the Tai Ji Circle charity in London, Master Liu Quanjun became the Director and Senior Instructor in 2005 and continues to the present day. It subsequently became a not-for-profit organisation and then a charity in March 2013.

Tai Ji Circle aims to promote a healthy way of life and to bring the physical and mental benefits of Tai Chi practice through regular classes and workshops to people of all ages in the capital, as well as providing subsidised classes for those with chronic health issues. Chris is a trustee and manages the daily running of the charity.

Chris teaches Chen Taijiquan to students at Tai Ji Circle and has taught tai chi and qi gong over several years in a variety of places including a P&O cruise ship and Triyoga in Camden and has also taught a class to patients recovering from breast cancer treatment. For five years she taught an open weekly day-time class for the elderly, in conjunction with Age UK in Hendon, at the Meritage centre and those classes were supported by MIND in Enfield, through the Big Lottery fund. The current Age UK Barnet classes aimed started in September 2016. In 2018 Chris was asked to teach a Parkinson’s tai chi class at the Edgware Hospital.

Living Tai Chi is an extension of Chris’s work with Tai Ji Circle, aiming to take Tai chi practice to an even wider range of people so that those who are less able to stand for an hour in a normal tai chi class can slowly build their strength and stamina and improve relaxation, balance and coordination. Chris has finished a course given by ‘Balanced Approach’ with Mark Peters specifically designed and recognised by the NHS for using tai chi and qi gong practice for rehabilitation and falls prevention.

Giving a talk about the health benefits of tai chi and demonstration for Age UK’s ‘Falls Awareness Day’ March 2015.